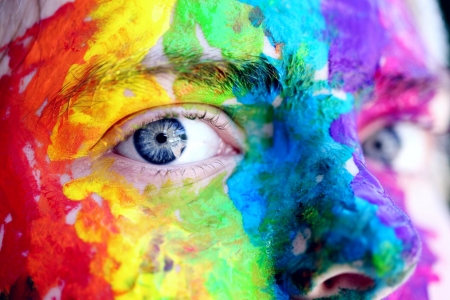 Doctors refuse to work with trans people in Azerbaijan

Азербайджан
Due to limited or no access to the healthcare system, trans people in Azerbaijan are forced to choose between gender dysphoria and self-hormonal therapy.

“My periods stopped, my face started to grow hair, my mother figured it out, and because of this my family physically abused me. I had to flee to Baku in the middle of the night, ”recalls Devran Ibrahimsoy, a 25-year-old trans man from Shamkir.

Devran has been undergoing hormone therapy for two years and suffers from serious painful side effects. At the time when the menstrual cycle should go on, he begins to suffer unbearable headaches.

He says hormones have strong side effects; because of some, his skin becomes more oily or acquires a specific odor, subcutaneous fat moves in the chest, buttocks and thighs.

“One of my friends was suffering from a strong smell, another had a lot of hair loss. After three months of therapy, I had problems with the hyoid bone, ”he says.

Dervan worries that the effects of hormone therapy may negatively affect his internal organs, including his liver.

Like most of those who decided to make the transition in Azerbaijan, Devran makes it without the supervision of a doctor.

Turana Nuri, an LGBTQ activist from Azerbaijan who works with the trans community in the country and abroad, said there are several doctors in the country who would like to work with trans people, but they have to hide it.

“Endocrinologists in Azerbaijan usually do not want to work with trans people,” she says, adding that it is much easier to find a suitable specialist in Turkey or Iran, but not everyone can afford it.

Nuri says most trans people she interacted with started hormone therapy on their own.

“Hormones are usually bought on the black market because there is no endocrinologist to sign the correct dose, hence the high risk of taking the drug at the wrong dosage,” she explains.

Two such drugs, testosterone enanthate and testosterone propionate, are disappearing in Azerbaijani pharmacies. Propionate is relatively cheap because it is low in testosterone, but it can only be purchased with a prescription.

When Devran cannot find the first drug, he buys five doses of propionate and injects them with one syringe.

“I was lucky to have a friend who sells them to me from under the counter. Many have to bring medicines from abroad, ”he says.

Among the side effects indicated in the description of these drugs are nausea, vomiting, headaches, skin discoloration, increased or weakened libido, oily skin, hair loss, acne, accelerated development of subclinical cancers, the development of benign and malignant liver tumors, liver or renal failure, heart failure, disorders in the blood coagulation system and others.

Because of this, according to human rights activists, a black market has emerged, where unsold drugs from international warehouses are sold.

"It is difficult to find a doctor who will give informed consent to prescribe hormonal treatment."

Shota Janjgava, an enocrinologist and andrologist at the Georgian National Institute of Endocrinology in Tbilisi, said that before starting hormone therapy, it is necessary to undergo a mental health examination and measure hormonal levels.

According to him, many expect a quick change in hormonal levels, but it is important to remember that the degree of changes and their speed depends on many factors, including genetics and the age at which they begin to take hormones.

According to Janjgava, the risk of a blood clot, as well as heart attack, stroke, diabetes and cancer due to hormone therapy is minimal, but increased in those who already have health problems or who start taking hormones after age 50.

“In general, for those in good health, the risk is minimal and can be compensated for by improved quality of life and reduced stress levels after starting hormone therapy,” he says.

Janjgava believes that access to hormones is fundamental to caring for the health of trans people. "Access to drugs has a positive impact on the well-being of those who choose to take hormones - not all trans people want it."

“Because of this, trans people have lower levels of anxiety, depression, and suicidal tendencies, which is more than just pleasure without pain,” Janjgava says.

He noted that for trans people, the opportunity to seek help is important not only because it improves their physical well-being - it is important for a sense of physical integrity and self-actualization.

"Although the literature on trance transition and the healthcare professionals who specialize in it are well aware of this, it is still difficult to find a doctor who will give informed consent to prescribe hormonal treatment."

Hormone therapy is not temporary - it is forever

Devran's troubles do not end with the fact that he was unable to find a doctor to oversee his transition.

Because of his physical appearance, it is difficult for Devran to visit many of the doctors he needs.

"When I go for an x-ray, for example, they can see my ovaries, and I'm never sure how the doctor will react."

“Sometimes I don’t know how to answer their questions. I take blood tests, they see that my blood is high in estrogen. They send me to an andrologist, and again I don't know how to behave when they ask me to take off my pants, ”he says.

After several unpleasant conversations with doctors (several even refused to accept him), he no longer visits the gynecologist.

Devran compares the situation in Azerbaijan to neighboring Turkey, where trans people can get jobs, and insurance companies cover the cost of their operations and medicines.

“Before the pandemic, I did not face any problems, everything was great. Then my source of income disappeared, and I had to stop therapy, I could not take the tests, this limited me, ”says Devran.

For people transitioning, hormone therapy is not temporary - it is forever. If a person is forced to abruptly stop it due to money or health problems, hormones in the body change, which can greatly affect health.

When Devran stopped taking hormones, he started having liver and heart problems, he says.

“My mental health is destroyed, I don't recognize myself anymore. But I still hope I can get out of this. "

Due to lack of funding, the article was translated by google translator. Gay.Az editors apologize for the inconvenience*
Gay.Az/Salam.gay/oc-media.org
16
6
14.04.2021