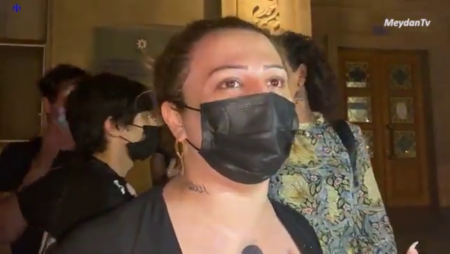 Азербайджан
On August 24, a group of transgender people held protests in front of the Garadagh District Police Department and the Ombudsman's office late in the evening.

They protested in connection with the murder of one of the transgender people in the village of Puta.

According to the protesters, the police did not give them information about the results of the forensic examination and the arrest of the suspect. They are convinced that the reason for the murder was an inflammatory video message from one of the local bloggers and demanded that she be prosecuted.

Protesters fear that this could happen to any of them.

Recall that on August 23, in the village of Puta, Garadagh region, local residents found the burnt body of a transgender man with his hands and feet tied.

The Ministry of Internal Affairs confirmed the information about the murder of a transgender man in the village of Puta.

As the head of the press service of the Ministry of Internal Affairs, Ehsan Zakhidov, told reporters, a criminal case was launched into the murder. It was established that the killed was a resident of Aghdam region, 27-year-old Ahad Nuriyev.

A resident of the Agjabedi region Mirshahid Mehdiyev was detained as a suspect in the murder, the investigation continues.

Due to lack of funding, the article was translated by google translator. Gay.Az editors apologize for the inconvenience*
Gay.Az/Salam.gay
29
6
29.08.2021