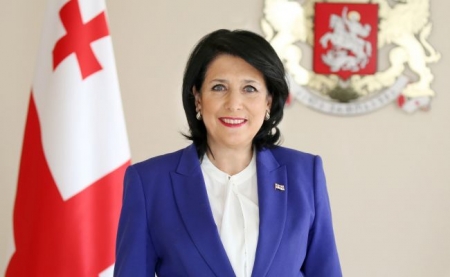 In world
President of Georgia on LGBT Pride: everyone has the right to march, violence is unacceptable

Georgian President Salome Zurabishvili, in connection with the "Tbilisi Pride Week" and the "March of Dignity" scheduled for July 5, declares that everyone has the right to speak up and express their opinion.

According to the president, all forms of violence, threats, pressure and hatred are unacceptable for her as a guarantor of the constitution.

“This is unacceptable because it is a violation of people's constitutional rights. And this is unacceptable for me as a guarantor and defender of the constitution. I believe that everyone has the right to enjoy freedom of speech. It is our inherent tolerance that is part of our identity. Our country is built on this and will develop on this tomorrow.

Therefore, I also believe that everyone has the right to speak, and the participants in the Tbilisi Pride have the right to express their opinion and exercise the right, which is the constitutional right of everyone - in accordance with the norms established by the constitution and the law. This is important for our country and our unity, ”Zurabishvili said.

Public Defender of Georgia Nino Lomjaria made a statement today, in which she called on the competent authorities and officials to protect the safety of participants, freedom of speech and assembly.

High-ranking officials are contributing to the politicization of the issue and are trying to present the restriction of the rights of the LGB community as a guarantee of the protection of its members, Nino Lomjaria said.

"Any peaceful protest or act of solidarity related to the protection of human rights, regardless of its content, is protected by the Georgian constitution, and the responsibility for ensuring them lies with the government," the ombudsman said in a statement.

Due to lack of funding, the article was translated by google translator. Gay.Az editors apologize for the inconvenience*
Gay.Az/Salam.gay/jam-news.net
24
5
02.07.2021